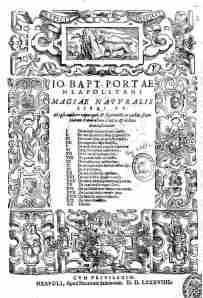 Giambattista della Porta’s Magia Naturalis stems from a long tradition of associated “Books of Secrets” that date to the middle ages.  These medieval works in turn learn much from their predecessor, Pliny’s Naturalis Historiæ, which work was clearly grounded in Aristotelian thinking.  The following are the chapters within the 1558 work:

Choose one account that you find of significance to the world of architecture and expound the connection between the description and architecture.  Do you see the observations as speaking to an emerging rational science or partaking in an Aristotelian reality?  As usual, please choose a passage not previously written about.

This site contains the Writers' Workshop for:

* Postings take place every Thursday;
* Comments are due by the end of the day Tuesday (11:59pm) of the following week;
* By using a screen name your comments will be anonymous to other writers;
* Writers are expected to post about 250 words per week;
* French and English comments are equally welcome;
* Writing in this blog contributes to your overall grade. An active inquiring writer will enhance their course grade by several points while an infrequent writer will lower their grade;